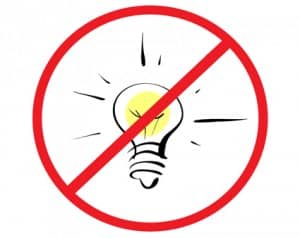 An idea is the most potent as well as the most convoluted thing in the world. A simple looking idea could turn out to be a major hassle of life and an extremely complex seeming one can be as easy as the process of breathing itself. They distract us, excite us, entice us and haunt us to sleeplessness. Yet we all consider them to be a good thing. And why not? It’s the ideas that get us out of sticky situations. If not because of ideas we would not have had so many amazing inventions and discoveries around us. Yet despite all the “goodness” about the ideas one should be careful about/with them. If an idea is the one thing that started the journey to success, it will take one rogue idea only to derail you from the right path. It is natural to get excited whenever you get a new idea and the sudden urge to try it, test it and implement could be unstoppable but it is important that you weigh the idea in the broader prospect of things and with long-term implications in mind. It is very easy for young entrepreneurs to get distracted by new ideas and waste their time and energy in chasing them jeopardizing the effort they have already put in their startup. It’s not uncommon to see new entrepreneurs running after new ideas like new marketing initiatives and adding new feature to the product totally disregarding the existing bugs or issues or drawbacks in the product that are already there. People tend to start building new shiny features when the old ones are still not working properly. They start chasing new marketing mediums even before they have properly used the conventional ones. They start chasing startup communities and VC meetups even when the product is half-baked just because that is the “cool” thing to do. It is true that entrepreneurship starts with an idea but an idea is all it takes to kill it as well. You have to see through the options and weight them based on your standing and direction. Optimization only comes after completion. You cannot optimize something that is not even there.