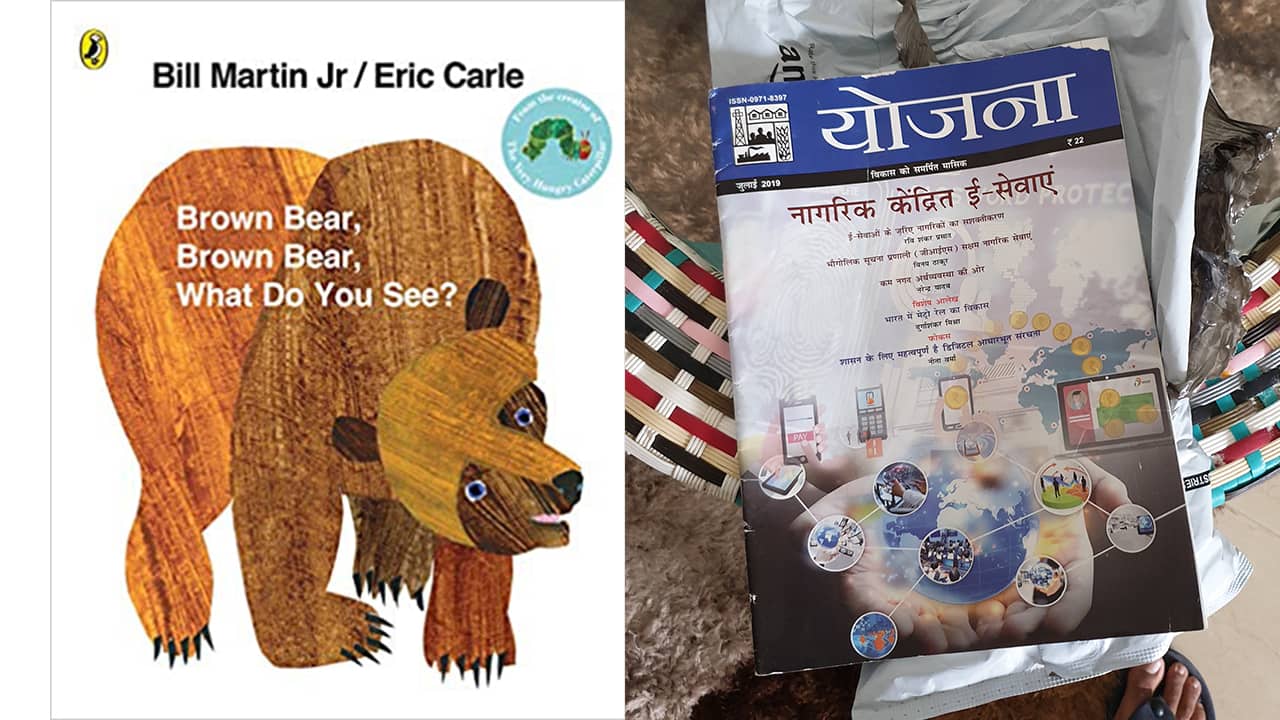 Meera loves books. Her bibliophile father, yours truly, had conspired early on to trick her into liking books and with a cunning scheme of always surrounding her with more books than toys and reading to her in hysterical voices - it seems to have worked. She is especially fond of The Very Hungry Caterpillar by Eric Carle (recommended) so it was the logical thing to do to order another book by the same author. That’s how her father reads, that’s how she will too.

So we ordered Brown Bear, Brown Bear, What Do You See? on Amazon and sat by the door waiting for the delivery to happen.

After about a week the package was delivered. To say that I was excited about the new book would be a gross understatement. I went down to get the packages, sanitized the bejesus out of it, and opened up the package. The bear was not there. What was there was a whole lot of disappointment along with a July 2019 issue of the most random magazine - Yojana (pictured). After cursing Amazon, the person who packaged it and fate, I went ahead and raised the refund request on Amazon. People have been delivered bars of soap in iPhone boxes in the past. I think I will survive. And then I got to thinking. This is the conclusion

The wrong item was not sent by mistake but rather deliberately 😱

A typical end-user doesn’t know that their Amazon orders are fulfilled not directly by Amazon but a whole lot of sellers who use Amazon’s platform and logistics infrastructure. For them, Amazon is the seller and they anchor all their hopes and dreams with Amazon only. This means every time anything bad happens, its Amazon who is usually on the receiving end of the brunt of an irate customer. This is why Amazon and other marketplaces like Flipkart, Myntra, etc are really strict with their sellers. Sellers have to perform really well and that too regularly to maintain a good relationship with Amazon. If you do not perform well or do not fulfill sales you run the risk of being deprioritized or even worse delisted. Amazon will always uphold its user’s experience over its relationship with any vendor (except Cloudtail maybe). So sellers tread extremely carefully so as to not piss off the Amazon gods.

So this is what happened here. The seller of the bear book either did not have the book in the first place or simply forgot to update the inventory. When my order came in they did not have a book to deliver. I will give them the benefit of the doubt that they must have tried to source the book from somewhere else but failed to do so. Eventually, they took the cunning way out. They deliberately sent me a random book so that they can at least claim that the order was fulfilled. They were certain that the customer will raise a return request and get a refund but that takes the sword of unfulfillability off their throats and moves the process to a whole new pipeline. Today they can even boldly claim that they had sent the actual bear book but the unscrupulous customer has tried to defraud them by keeping the original book and returning this magazine under fake pretense. (BTW this happens a LOT. I myself work in eCommerce and many times a month receive return products that are not even ours. Since we are not a marketplace but a single label the possibility of having sent the wrong brand product is impossible.). Looking a just how many returns Amazon must be handling every day there is a very small chance that this will come back as a demerit to the seller.

“But Akhil; it could have been a genuine mistake while packing. How can you be so sure that it was a deliberate act”, you ask. To that I say - Look at what was sent to me. It was an old used local magazine and that too a whole-year-old edition. Who even is buying this for this to have been a mixup. If it was a mixup, it would have been some other book. Not this.

The seller has quite conveniently played the system to ensure that their relationship with Amazon doesn’t get affected. Shady but quite ingenious.